NPL Sports, 22 Jan : Robert Lewandowski and Thomas Mueller each struck twice to hand Bayern Munich a 4-2 win over Werder Bremen on Sunday and stretch their lead at the top of the Bundesliga to a staggering 16 points. 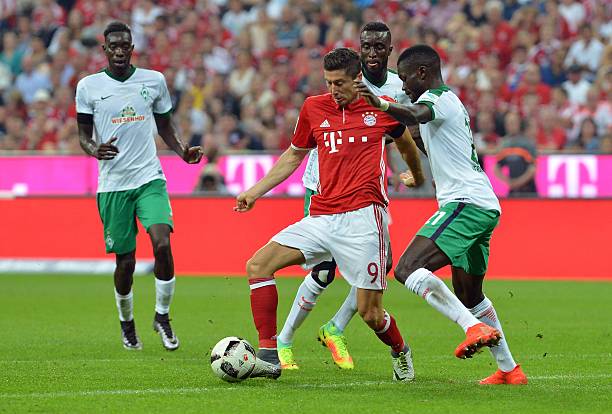 Lewandowski, who had missed Bayern’s last match with a knee injury, put Bayern 2-1 ahead with a powerful header in the 63rd minute.

He then grabbed another in the 76th with yet another header after Bremen had levelled with a Niklas Suele own goal.

In the first half, Germany international Mueller cancelled out Bremen’s lead through Jerome Gondorf and then put the final touch on Bayern’s win six minutes from time.

The forward has now netted 17 times in the Bundesliga this season as Bayern have now collected 47 points with Bayer Leverkusen, 4-1 winners over Hoffenheim on Saturday, second on 31. Schalke 04, on 30 points, are in action later against Hanover 96.

This site uses Akismet to reduce spam. Learn how your comment data is processed.

ABOUT US
It's an about the world's sports news and live sports events portal website. We are providing the latest breaking news from Badminton, Basketball, Boxing, Cricket, Golf, Football, Judo, Taekwondo, Tennis, Volleyball and other sports news.
Contact us: contact@nplsports.com
FOLLOW US
© Copyright 2018-2021. NPL Sports. All Right Reserved. Powered By: DivTag
MORE STORIES
Cricket

Chennai moved to the top spot by defeating Hyderabad by 7...