Liverpool star Mohamed Salah says he likes La Liga’s style of football, but does not want to comment on rumours linking him to Real Madrid as he is happy at Anfield.

Egypt international Salah, 25, has been a revelation since his £34 million arrival from Roma last summer, with 28 goals in 34 games for Jurgen Klopp’s side, including five in the Champions League.

He scored twice in Sunday’s 2-2 draw with Tottenham Hotspur, making him the quickest player to 20 Premier League goals for Liverpool. Salah did it in 23 games, and the last Liverpool player to do it quicker in top-flight football was Fred Pagnam in 1915.

That form has led to speculation that Madrid could target Salah next summer, with  Egypt coach Hector Cuper suggesting a move to the Bernabeu would suit the player.

Salah told Marca that he could not comment on what Cuper had said and stressed he was happy at Anfield.

“I don’t have much to say about that,” Salah said. “If I must say anything, it is that I am happy at Liverpool.”

Liverpool have lost Luis Suarez and Philippe Coutinho to Barcelona in recent seasons, but Salah is ignoring links with a move to La Liga.

“For the moment I am here [in England],” he said. “I want to focus on my team, and to end the season very well. I love the Premier League, the football here. 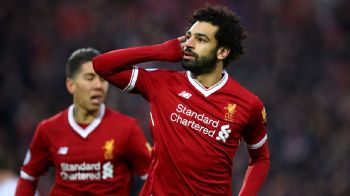 “Last year I did well at Roma but this year I am scoring more goals. I want to help the team to win trophies or be in a good position in the league, in my head I’m trying to do that. I [also] want to help my national team to get out of their group at the World Cup. These are my objectives for now, then we will see.”

Having also played for Basel, Chelsea and Fiorentina during a roaming career so far, Salah did say he enjoyed watching Spanish football.

“I watch some games, not always, as sometimes it coincides with Liverpool games,” he said. “It is a good league, of course, with top teams, and the style of play is very attractive.”

The height of Salah’s ambition is shown when asked if he has thought of winning the Ballon d’Or.

“In football you never know,” he responded. “That is the biggest dream, if I achieve it I will have reached the top. But I have already told you my objectives for this season.”

Salah said that he was missing the “incredible” Coutinho, who in January moved to Barca in a €160m deal.

“I miss him — he was my friend, a very nice kid,” he said. “I wish him all the best at Barcelona as he is an incredible player, with a lot of quality. He is a relaxed person. I am very proud of having played alongside him.”

This site uses Akismet to reduce spam. Learn how your comment data is processed.

ABOUT US
It's an about the world's sports news and live sports events portal website. We are providing the latest breaking news from Badminton, Basketball, Boxing, Cricket, Golf, Football, Judo, Taekwondo, Tennis, Volleyball and other sports news.
Contact us: contact@nplsports.com
FOLLOW US
© Copyright 2018-2021. NPL Sports. All Right Reserved. Powered By: DivTag
MORE STORIES
Football

Karim Benzema strikes as Real Madrid for earned a 1-1 draw...